Collide – Color of Nothing 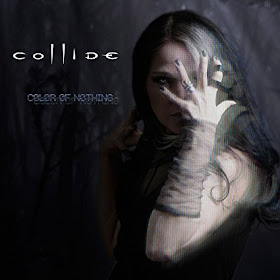 I’ve always admired the esteemed and unclassifiable outlet that is Collide, and I can honestly say Color of Nothing is by far their best release to date. Rooted in dark wave, electronic at its core, Collide’s overall sound is distinct and uniquely its own.

Made possible by Pledge Music, Color of Nothing is the dynamic duo’s sixth release and they created something that is musically profound. Hypnotic, atmospheric, and majestically epic each song is a piece of the greater whole, building on what has come previously to create a seamless aesthetic movement. Intricate and full of many layers, the album seduced me before the end of the second track and my attention was immediately drawn into its contemplative and passionate world, which is lavishly illustrated by Statik’s amazing mixing and sound design and kaRIN’s spell binding ethereal vocals.


It’s rare that I find an album I love so much but Color of Nothing delivers on all accounts. It’s delightfully delicious from beginning to end and I found myself hitting repeat over and over again. Do yourself a favor and purchase this majestic piece of art. You won’t regret it. - NIN
Available at www.collide.net/store, iTunes, and Amazon.
Nikki at 10:00 AM
Share